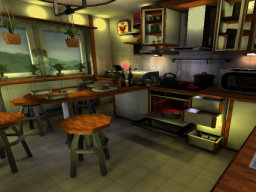 ~ Download ~
You believe that only your wife works in the kitchen? Well let's turn it around... Let's go snipe in a kitchen. Just a fun map. [UJE]Niek via MSN
| ET-Only 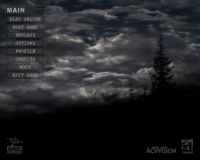 A new background for the menu of ET. The clouds are moving with mid speed in two layers from right to left. Put the pk3 in your etmain folder, start ET and enjoy the view. :-)

"The Enemy Territory: QUAKE Wars 1.5 game update is now available for download both via the in-game updater and the mirrors below. 1.5 comes with a large number of improvements and fixes, a full breakdown of which you can find in this blog update.

If you have the Steam version of Enemy Territory: QUAKE Wars, you can get the update automatically by simply starting up your Steam client. The Mac version of the update is still rumbling through Aspyr's QA department and should be released within the next few days." ~badman

With the impending release of the 1.5 update for ETQW, we've got the latest version of the Enemy Territory: QUAKE Wars Software Development Kit (SDK) for you to download. This one's fully compatible with ETQW 1.5 and incorporates the following improvements:

Special thanks (from the readme):

I added the wilsflame to the mortar shell to see how it would look on dark maps like radar, and it looks not to bad, really highlights the mortar. Sort of making it appear to be some kind of mini rocket. ~RayBan

Three different versions: So, you admins have a choice, but the _rt version looks nice with it's black smoke trail and the _pt version might be to much, but it looks better.SplashDamage

A complete removal of grass, rain and snowflakes. Put the file "z_no-grass-rain-snowflakes.pk3" into a mod folder (etpro, jaymod, etpub, nq, etc...) to make sure it will be downloaded to the client. Or put the content of this file in your mod to customize the server. I only made the content so small as even possible for me.

"Just a quick update on where things are at with the Enemy Territory: QUAKE Wars 1.5 game update. We're currently doing some last minute testing with id Software to track down a few issues that have turned up, but we don't anticipate this to take too much time. We really just want to make sure that all the issues we're aware of are actually addressed rather than pushing out an update with a big asterisk and a list of It'll-break-if-you do-this-ers attached to it.

Distribution is being sorted out at the moment as well and if there are no further complications, we anticipate having the update out next week. We'll try and keep you as updated as possible from here on out, so as soon as we've got a definite release date, you'll read it here first." ~badman Community Enemy Territory 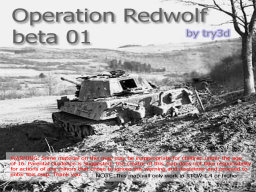 ~ Download ~
Do you have what it takes to survive Redwolfs' lair? The Axis are at it again! This time they have hidden the body of an alien baby at their secret perverse retreat for future genetic development of a super soldier to turn the tide of the war in their favor.

Allies: Your job is to break into the old heavily fortified retreat and recover the alien body at all costs. Once you have stolen the alien, you need to get to the radio room and transmit your success. Beware the Axis have been made aware of your operation and are preparing for your arrival!

Axis: Nearing completion of the Transmogrification test sequence, your unit was about to celebrate to your success until a disturbing radio message arrived. The allies have become aware of your impending success as well, and have dispatched a Ranger unit to stop you. At all costs the allies must not succeed. Defend the fort and its precious cargo to the last man! Wolfenstein Files

EgaL from RtCW4ever! created a new soundpack wich samples from different movies and songs (Matrix 1 & , American Pie 1 & 2, School of Rock for example) and the new song from StockenfelS is included, too.
All sounds are in english.

18.05.2008 : 12:36
The clan Realm of Napalm released three waypoint files for their sniper maps.
The waypoint files are included into the downloadfile of the maps and was made by [UJE]Niek and =PHA=NARMER.

We would like all-round players to join us. He or she will be playing max. 48 hours on the BlackOps server with 19 other clans (and max 10 bots), split into two teams, playing the maps that are now in the campaigns. A lot of the clans can do good scrims, but how will they do when theyre in another team? Will they adapt? After 48 hours, the one with the most XP wins!.

Gameservers.com will provide some extra slots.

A few clans are already looking for that right player to beat you all!

Date/Time: Still to be setBlowfish via PM

Chris aka {free}m3lAn!3 (named after his daughter) made not one, no, two new Heavy metal songs about the best game in the world!

1:
The best game in the world
is ET, which I like so much
I enjoy to play this game
other games are really lame

2:
Once I tried to play another game
but I left to be a winner
for this reason I play only ET
so other games I just turn around and walk away

3:
I play No Quarter, Jaymod and Pro, too
Many mods exist, this makes me shout "Yahoo!"
I play medic and engineer
while gaming I drink a bottle of beer

4:
My mouse begins to glow
I play until I'm done
My rating begins to grow
I quit, the end has come

5:
I play ET now for five years
and never will I tire
I hope ET will last forever
we will game always, XP getting higher 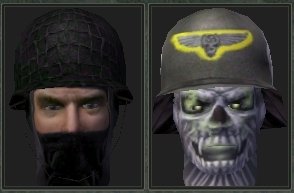 Updated allied part of this skinpack.

Two mods in one file. One mod will turn all Allies into BlackOps Hunters, the other one turns the Axis into some kinda zombies. The zombies are very strong and are hunted by the BlackOps. Who will win?

This soundpack has 98 fun sounds and 10 sounds special for the admins. There is some modarated swearing, but most files ok clean. Just place it in your mod folder.

This will also replace the "Fight" sound into "Lets get ready to rumble" and will give you a cool 30 seconds left sound.

Replaces the americans with russian soldiers. Not only the playerskins are changed, all american signs in game, HUD and limbo menu are replaced with soviet ones.

Made this skinpack on request by SPARTAN of the clan ETComrades. Many thanks to him and EgaL of RtCW 4 ever! for testing, suggestions and feedback.

The Anti-Cheaters LUA module made by Luk4ward for ETpro servers contains Reyalp' fixes in a modified version and an important fix for the ETadmin mod wich prevents an level exploit using a prepared name.

"Work on the 1.5 game update for Enemy Territory: QUAKE Wars is steaming ahead at full knots and we're now testing the latest version of it internally to see if there are any glaring issues left to fix. Even more exciting, we've put together the final changelog for the update, which you can find concealed somewhere within this blog update. In a smallish nutshell, 1.5 brings a number of new features and customization options to ETQW and fixes all of the issues left over from 1.4. Let's have a look..." 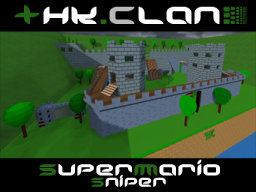 ~ Download ~
Welcome in the world of supermario. That's what the theme is. This is a mirrored map with on both sides a castle. There are lot's of sniperplaces in this map that can be reached with portals. The map is also very good playable with not so many people. ET-Only
| Servers running this Map

EgaL from RtCW4ever! managed it to convert the Bani Soundpack from RtCW to ET. The pk3 includes 22 new and fitting chatsounds with a filesize of only 594 KB. As serveradmin you don't do wrong puting this tiny pack to your gameserver. 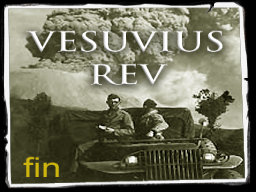 ~ Download ~
1944 Bay of Naples  Allies are advancing through a town where Axis have been excavating Roman ruins under the streets in search of legendary relics. Allies need to steal the discovered Urn relic from the excavations. Meanwhile Mount Vesuvius has started erupting.

This is a totally reworked and more compact version of the Vesuvius map by mrfin & firefly 07.ET-Stuff
| Mr. Fin 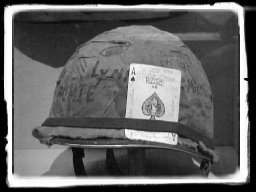 ~ Download ~
Marines need to steal the Vietcongs tank to assault their camp. Escort the tank over the barriers, blast the Radar gate and the base coordinates security room. Steal the coordinates and transmit it with the radar radio. Good Luck soldiers! Wolfenstein Files
| Servers running this Map

This menu is designed to open everybody the possibility to tweak the game to very low details or for just having a more clear view to see the enemy better.

We like evey new stuff which is released for the ET and we try to collect the best to give more fun experiences for the palyers.
So, here is the most complete NorodaNQ skin and sound pack (14 MB) which is for the NoQuarter mod.

All HOCBench program are distributed as Free, but you need a simple registration to the full use. That means, you can install and try it immediately, but you can't change the filters and the demos. The registering is FREE just send me a simple email and you get back my answer within 24 hour. This email containing your personal registration info for ALL HOCBench program.

Gameplay:
Strogg side are limited to melee spike. Strogg bots roam the level randomly. GDF spawn only with pistols and must scavenge the level for pickups - weapons/ammo/health packs and repair packs. There is a evactuation area for the GDF in the map (shows up on mission list), it can only be reached using a flying vehicle. The only flying vehicle is a severely damaged bumblebee. The engineers repair pliers now run off a repair pool, to fill this up use a repair pack. GDF do still have respawns, but since they drop all their weapons/packs, spawn back from where they want to be and they are running againt the clock, it's a setback they should avoid.

To pick up 'pickups'(weapons and packs), aim at them and pressing Use ('F' key by default). To 'use' a pack, press alt-fire while holding one, normal fire drops the currently held pack. Players are limited to holding two primary weapons at a time the drop weapon command ( _drop, ''' key by default, can be rebound via menu). Players are limited to holding four packs of any mix. Repair packs currenly look like ammo packs, but you can see the type of pickup by looking at it.

If playing with bots make sure bot skill is not on training, that number of bots on strogg side is high.Community Enemy Territory